Susan Lacy's Spielberg is good but largely unremarkable look at the life and films of Steven Spielberg. It covers pretty much everything about the director to various degrees.

For the first time Spielberg sits down for an on camera interview to discuss his life and films and the result is a mixed affair. As Susan Lacy said in the Q&A she could have made a six part mini-series on the man and his films or done several hours on each film so compressing it down to 150 minutes was hard. The problem is the unevenness to the handling of the material is wearing and at some point I wanted to stop it and take a break. 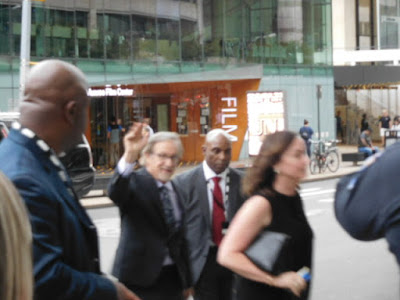 While some films are covered in detail (RAIDERS or SCHINDLER'S LIST or MUNICH) other films are only dealt with fleetingly (say HOOK or any of the sequels) and given token coverage in a clip here or there. His personal life, outside of his parents and sisters, are completely off screen. The result is like an odd all you can eat buffet where there is varying amounts of food.

I liked SPIELBERG but I didn't love it. The uneven nature of it keeps it from being the be all and end all biography. It is definitely worth a look but I don't know about repeat viewings.