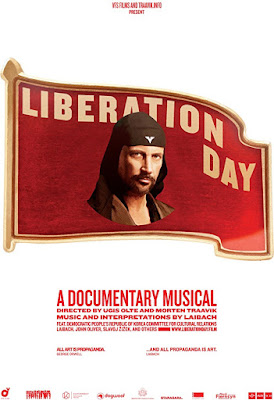 Someday the North Korean’s are going to realize that the rest of the world is putting them on with some of their cultural envoys and get pissed off- until then we’ll have gems like LIBERATION DAY to pass the time.

A weird ass kind of real world THIS IS SPINAL TAP, except the band isn’t a joke, LIBERATION DAY shows what happens when co-director Morten Traavik sets up a cultural mission to North Korea by bringing art rock band Laibach to perform. The idea is that the group’s faux neo-fascist attitude would be easy for the Koreans to digest. What results is a clash of cultures that is not what anyone expected.

Funny, moving, and surreal Liberation Day is one of those films I desperately want to see again because it’s straight faced look at what seems to be a joke results in all sorts of laughs and most unexpectedly trains of thought. Sure I knew I would get a chuckle or two out of the culture clash but I didn’t expect to have my brain spin off in six different directions. This isn’t a straight forward us vs them tale, it couldn’t be since director Traavik had previously worked with the North Koreans. He was obviously going after more than a straightforward “mock” doc.

Having seen the film a couple of weeks ago in preparation for this year’s Fantasia I find I am still haunted by it. Normally I write up a film as close to when I see it but this time I had to sit and ponder it. I had to think about what I really felt. I’m still not sure. That’s a good thing.

I do know that I will have to see the film a couple more times before I can really discuss it.

I first heard of the film not long before it when Nate Hood told me about it when we were sitting at a concert. There was this film I had to see…. And now having seen it I know why he felt that way. This is a wild film that doesn’t play by the rules while sticking very close to them. It’s a film that forces us to reevaluate what we are seeing.

Having seen the film I can now do for you what Nate did for me and tell you there is this film you need to see and it’s called Liberation day…
Posted by Steve Kopian at October 16, 2017