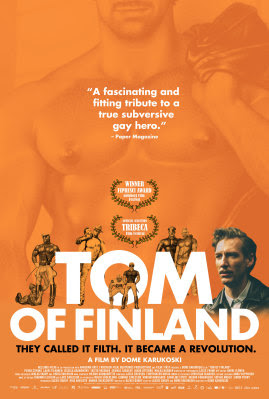 It may sound odd but I have always loved Tom of Finland's art. I am not a gay man, however in running across his work in bookstores I was always drawn to his line work. I still remember my first encounter seeing a cover and wondering why it was listed as adult- and then I opened the book and realized why. Ultimately though while his his work is very much about sex is also pieces of high art.

Dome Karukoski's cinematic biography of Tom, whose real name was Touko Laaksonen, is a really good film. While the film can be graphic in its depiction of sex, the film is really about the man, his art and the man who he fell in love with.

Beginning in the second World War the film follows Touko as he cruises parks and makes art. We watch as he tries to have the life he dreamed of but finds that society isn't understanding. As time goes on he and his art begin to get noticed and eventually he becomes well known around the world.

While we come to understand "Tom" and what inspired him, we also see the changes that have come in society over the last 70 years. Its a frequently moving trip.

As much as I like th film I do have to quibble about the pacing. Much of the first 70 minutes is Touko living his closeted life and having legal trouble. It is a deliberately paced film that takes its time setting everything up. The problem for me was that once Touko sends pictures to the US and his work begins to be printed the film races to the end. A great deal happens and not all of the whys and wherefores are covered. Its not fatal but it reduces several moments that should have been even more emotional. (Though the hand holding with the yellow curtains crushed me)

Definitely recommended for anyone who won't be bothered by the subject or the art.