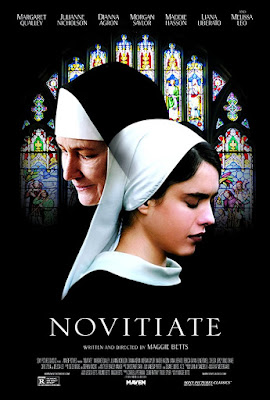 As the seismic change of Vatican II ripples through the Catholic Church, a young woman begins her path toward becoming a nun.

Beautiful and beautifully made film with a lot on its mind NOVITIATE is a film that is going to crawl into you head and rattle around there for days. It’s a film about journeys of life and the soul that are forced to detour when life and circumstance get in the way.

This is a very much a spiritual journey. Cathleen, the young woman at the center of the film is comparable to some of the great questing characters in films such as THE RAZORS EDGE. Raised as a lapsed Catholic she finds a peace in the church as a child. Later when she is given a full scholarship to the local parochial school she begins to find a place where she thinks she belongs. Cathleen’s limited experience makes her think that, perhaps, she has found her path to God and acceptance. However while her path would not be a clear one under the best of circumstances, the changes brought by Vatican II will be adding additional bumps. This results in a journey that is so beautifully crafted that we are not only on the trip with her but moved as well.

NOVITIATE is a film where every character is in crisis. Writer director Maggie Betts has to be applauded since she doesn’t simply focus on Cathleen but all of the characters. Everyone is well drawn and everyone is forced to come to terms with the choices that they have made or have had forced upon them. From the nuns, the novitiates and even Cathleen’s mother, everyone arcs.

I love that the film gives us a real sense of what it must have been like back in 1964 when the Catholic Church reinvented itself. Not only do we get a chance to see what life was like in the final days before the change which throws everyone into crisis mode. The strict codes of behavior and often abusive ways practiced by some nuns make us ponder why anyone would chose the life. However, despite questioning some behavior there is a real “you are there quality” to it all which helps us to understand why the women have chosen to be nuns. We become one with them and so by the time the Mother Superior  reveals the full scope of the changes the Church is demanding, we are just as devastated by them as they are. Their hold as keepers of the faith has been diminished or wiped away and they are left broken.

Maggie Betts has crafted a film that is rich with plot threads and themes. It’s a film that you’ll want to see repeatedly not only because you will come to like the characters and will want to spend more time with them ,but also because Betts has so many balls in the air that you’ll want to see what she is has up her sleeve. There is a lot of food for thought, someting I found out when I sat down to write up the film and I kept wanting to discuss a new point only to realize that I didn’t take good enough notes to have caught everything that was being thrown at me. Actually what happened was going in I thought I knew what the film was, only to find it changed as it went along. Thematic elements that take center stage toward the end of the film are quietly there at the start and I missed them. I need another viewing or two to do the film justice.

While the film has much to recommend it, and I do recommend it highly, the film isn’t perfect. Occasionally Betts makes things a tad too clear cut or ducks down a well-worn plot path to get to where she is going. While far from fatal, the bumps make the film slightly scratched instead of perfect.

If you want a thoughtful, heartfelt and moving examination, of life, faith and our place in a changing world I highly recommend you give NOVITIATE a look when it opens tomorrow in theaters.
Posted by Steve Kopian at October 26, 2017