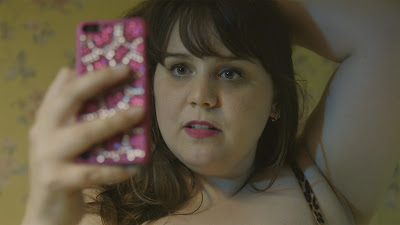 WEXFORD PLAZA is a hell of a movie. A small character study, it is nominally a comedy of sorts but its laughs are pained ones since the film is close to the bone of reality and many of the laughs are uncomfortable and ones many of us have lived.

The film follows a young woman named Betty who has gotten a job as a security guard at a dying strip mall. Hanging out with the losers who dwell there, Betty's life is going nowhere. When she ends up in an sexual encounter with Danny, a friendly bartender both of their lives spin out of control.

Director Joyce Wong has made one of the more intriguing films of the year. She has crafted a film that has no easy answers or point of view. Things are malleable as we see events from both Betty and Danny's points of view. Betty is both a young woman we feel sorry for and one who wants too much. Danny is both a loser and a guy trying his best who is thwarted at every turn. Wong upsets our expectations by not taking view of events. There is lots of shading which makes the film the sort that you'll want to see a second or third time just to see how it plays once you have the fully rounded picture of the character fro the start.

Wong also needs to be commended in not going the Hollywood way in the way events play out. Not everyone is witty, scenes play out in real life with pauses, silences and not a lot happening. This isn't to say the film is draggy or boring rather that its grounded in real life. People sit and drift off . People behave awkwardly. Its the awkward nature of some of events that give the film it's humor.

In addition to the humor the film has a great deal of bittersweet sadness. Both Danny and Betty are trying and hoping for more but can't We can see that things are going nowhere even if they can't. More importantly in playing ot in a realistic manner we see the reality of the modern connected age-the pained reality that no one is. Betty for all her connection in cyberspace still lives alone. Her encounters with Danny and others are awkward because she, nor many others, have any sort of social skills because they are more on line then in the real world. WHile not a sad film as such the film and it's characters will break your heart.

That the film works as well as it does is because of Reid Asselstine as Betty and Darrel Gamotin as Danny. Their performances are quiet and understated to the point of perfection. These are lives lived not characters performed.  There is a grace to their work that if there was any justice put them in the running for the Oscar however the Academy will sadly ignore this film because it isn't flashy or have a big named star baiting the members to give them the golden statue.