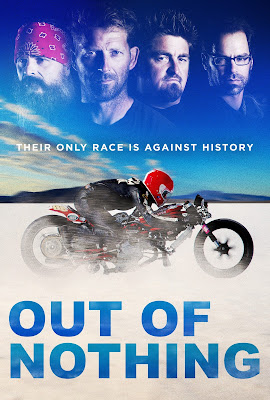 Stunning in almost every way imaginable OUT OF NOTHING is a film that came from nowhere to absolutely delight me. A beautiful and moving film it deserves to find its audience now that the film has hit VOD thanks to October Films.

The film is the tale of several men who seek to break the land speed records on motorcycles at Bonneville Salt Flats in Utah. Its a film that puts us into the shoes of the men and makes us willing co-conspirators in their quest for fame.

Beautifully shot the film has images that will haunt you for long after the film has ended. I'm not talking about the racing, though that is spectacular but rather the landscapes and what should be everyday images, all of which have been photographed to turn them into high art.

Director Chad DeRosa has made an amazing film and it demands to be seen.