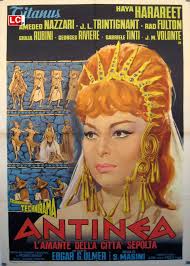 The best version that I've seen of the story of a group of men who find Atlantis under the Sahara. Here the time is "now" and the men are flying in a helicopter across the desert when they are rerouted around an atomic test site. The copter is forced down by a terrible storm and they take refuge in the caves of some rocks. Eventually the end up in Atlantis where they get mixed up in court and romantic intrigue.

There are a numerous versions of versions of this story going back to the early 30's. I've seen a few of them and the American release versions are either hampered by bad dubbing into English or by really bad acting (the 1940's version has a Queen who just awful). Here the acting and the dubbing are fine. The story, which can be very soapy is handled nicely buy legendary director Edgar Ulmer and you get a nice balance with the adventurous aspects of the tale. The look and the feel of the film is clearly similar to the sword and sandal films that were running rampant on the screens of the world at the time and it really works here, it gives Atlantis a nice feel.

Definitely worth a look see if you run across it, especially if you're a fan of the European adventure films of late 50's and early 60's.
Posted by Steve Kopian at October 25, 2017