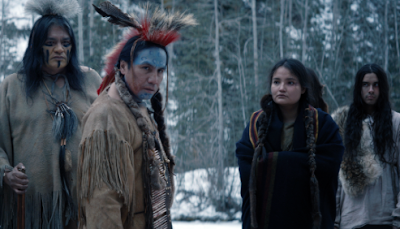 Sean Meehan’s LOST FACE is thing of beauty. It is a beautiful cinematic rendering of a Jack London story that plays like a mini feature.

The film picks up at the moment that some Native Americans have overrun a stockade. They have attacked because the men inside it have been doing terrible things to them and stealing their furs. They have made short work of everyone except one man. When it comes time for him to be tortured and killed he offers the chief a great medicine if his life will be spared.

This film is like the best short films and stories, a perfectly contained tale. There is nothing we need to know beyond its run time. There are no loose ends or desire to know more. Unlike most short films I've run across this is not a mini-version of some feature film and we are so much better for it.

I can't say enough about the film on a technical level. Everything is spot on from the look and feel of the images, the music and especially the performances which carry you along to the end.

What makes this film so special is that Meehan has fashioned it in such a way that this is more than a historical drama. The story could work in any period and thus becomes something larger speaking about the foibles of human existence. I say tins because in preparing to see the film I reread the London story upon which it was based and while I found it very good, I also thought of it as being very mush of its time and not so much now. Meehan has made something that makes the story muc more untethered in history.

Highly recommended. LOST FACE is currently on the festival circuit
Posted by Steve Kopian at October 27, 2017