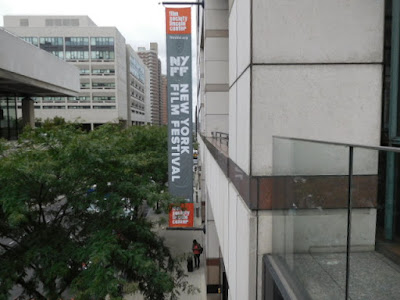 NYFF is over and all I have to say is well done.

I had a blast.I saw good movies, hung out with friends and talked movies for weeks.

Out of the 50 odd films I saw, all except one were worth the effort and the one that wasn’t at least got me to see Isabelle Huppert up close.

I had such a good time (outside some really WTF audience behavior at a couple of screenings) that I have almost nothing to say other than let’s do this again next year.

My only request is that they press screen more of the films because not enough of this year’s crop of films are not going to get the coverage they deserve. Films like THE VENERABLE W which was not only one of the best of the fest but also its most timely and important film were left to flounder because word never got out. (If you're not going to screen the films not on the Main Slate, why run them?)

And what were my high points of what turned out to be a very good year?

HALL OF MIRRORS- Edward Jay Epstein rattled what we knew of our past and has grave doubts about one of out heroes. You will talk for hours after seeing the film

The Richard Linklater talk- this was like hanging out in a living room talking movies with a buddy.

ZAMA- beautiful and profound film about life and existence.

FIRST REFORMED- Paul Schrader's film is one of kind, not for all audiences and a glorious meditation on faith, belief and the human heart

BPM (Beats per Minute) - moving bittersweet tale about the men and women on the front lines of an epidemic. It is also an amazing romance

The PANDORA’s BOX screening with orchestra was magic. All silents should get this treatment

The Vittorio Storaro/Ed Lachman Masterclass restored my love of cinema. It was an intellectual discussion of the beauty of movies

THE VENERABLE W/ WHAT ARE YOU UP TO.... Barbet Schroeder's warning to the future was the most vital and important film(s) at NYFF this year. Its importance can not be underestimated in a world increasing ruled by hate.

ZORN portrait of the artist by a friend is the first part of a longer film. It is unlike any other music film you've seen and one of the best music docs ever made.

Now to bed and to sleep until it's time for next year....

(Additional reviews will appear through the week)
Posted by Steve Kopian at October 15, 2017