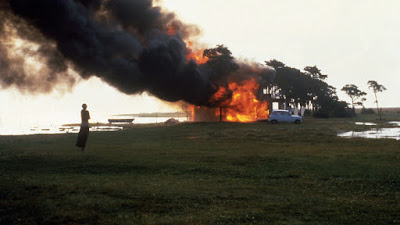 In what is possibly Andre Tarkovsky’s most accessible film the filmmaker asks us what we would give to save what we love. It’s a simple question that Tarkovsky spins off in several interesting ways.

I’m a big fan of Tarkovsky’s. I love several of his films (Andre Rubelev, Solaris, this film) , I like some (Stalker) and others I’m not too sure about. Even in the case of the films I’m not sure about I find that I return to them because they trigger thoughts feelings and god knows what else with each viewing. Tarkovsky’s films make me a participant in a dialog with the filmmaker. It may not always lead to anything but it always engages me.

With the Sacrifice we have a family away in the country. The world ends, or at least heads that way and our hero is forced to bargain with god in order to save everyone he loves. What makes the film interesting is that the main character isn’t particularly a believer or a non-believer, he is a man. His deal with god seems to cover from hopelessness and helplessness at saving his family.

As with most of Tarkovsky's films the story or the film itself is starting point for a discussion. I've screened The Sacrifice with several different friends and the discussions that the film starts- usually lasting for days afterward- go far and wide with the film frequently falling into the background.

I am haunted by the film, While it is not a film I carry with me completely (where I can conjure images and lines of dialog at the drop of a hat), The Sacrifice is always with me not so much as something I carry but as part of me and my psyche. I think I don't remember much of the film simply because it is something that that is me, much like say the back of my hand is.

Everyone should try this film at least once. You may not like it, it may not mean anything to you, but at the same time if it clicks with you it maybe come something truly special.
Posted by Steve Kopian at October 12, 2017