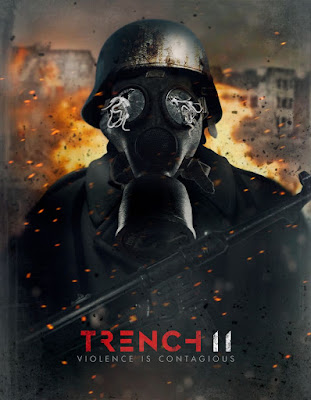 War centric horror films tend to take one of two plot paths, either: a group of soldiers are sent on a secret mission that goes wrong or they happen upon something or some place that they never should have encountered by accident. There have been so many of these films that we don't live and die by the basic plot. Horror fans treat them like the early Hollywood program pictures, and determine or like or dislike based on how well the filmmakers dress everything up so we don't notice  any well worn plot devices.

TRENCH 11, which made its US premiere at the LA Screamfest last week,overcomes a standard issue war setting to become one of the best war based horror films not to mention one of the best horror films of  2017. It is a tightly wound claustrophobic film that will keep you on the edge of your seat.

The film starts in the closing days of the First World War when the Allies get word that eleven miles behind the lines the Germans have built some sort of vast underground complex. They have suddenly abandoned it, fleeing with just the clothes on their backs. Fearing some sort of super weapon the British, supported by a squad of American soldiers, send a couple of experts to the complex. What they find there will put their lives in danger, a situation complicated by the return of German forces sent to destroy the complex and bury the evil inside it.

This film kicks serious ass. Rarely has any war horror (or even a straight on horror) film been this gripping. This is a film where you stop wanting to know what is going to happen next and instead you find you have to know what is going to happen because you've developed a stake in what is happening. You genuinely care about the characters who are not just fodder for the slaughter. It's a simple trick that most filmmakers never try despite it being an easy way to grab the audience. Director Leo Scherman not only makes us care about the characters but makes us fear for them.

You have to applaud Scherman for keeping the tension high by stoking the fires in all the best ways. First the film is incredibly claustrophobic. We are, for most of the run time, in the twisty German complex which we don't know.

Next, explanations are kept to a minimum. Things are not overly explained, there isn't time. Things just move like the wind

Lastly no one is safe from the unspeakable horror. Scherman highlights this by first giving us a German soldier who would rather commit suicide than open a certain locked door. What is behind the door, we almost don't want to know. Of course we find out which then changes things up as we quickly find no one is safe either from the thing behind the door or the Germans determined to bury it.

In it's way this is less a horror film then top notch suspense film because if you swapped some details out this could be billed as a thrillers. Of course what you call the film doesn't matter since Scherman and his team have made a film so gripping you will be carried along by what happens

I loved this film a great deal. It is a perfect popcorn film of the highest order. The film is so good that I can't wait for it to get a non-festival release so I can see it again.

TRENCH 11 is the war horror film at the top of its form. It is a great little film that deserves to be seen by horror lovers everywhere.