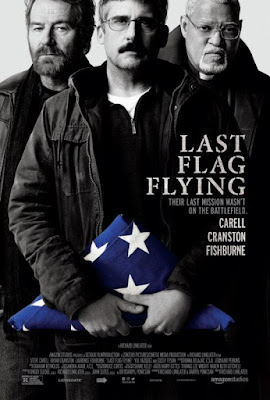 This is a repost of my review of LAST FLAG FLYING which opened the New York Film Festival.  Five weeks on I am still in love with the film and I still think it is one of the best films of 2017. If you want to cut to the chase just stop reading and go. If you need to know why keep reading.

There is a weird split with LAST FLAG FLYING in that it is a very messy film and yet the film will kick the living shit out of you as it leaves you quietly sobbing. This is not to say that it is a bad film, rather it's simply to say that like the men at the center of the film they are deeply broken but still have not lost their humanity or souls.

That the film is broken slightly isn't all that surprising considering its pedigree. The novel was written by Daryl Ponicsan in response to requests to write a sequel to THE LAST DETAIL film. He didn't want to write a second movie so he wrote a sequel novel. However when Richard Linklater decided to make a film of the book he couldn't use the character names so he changed them. He then folded the story to reset it so that he could bring in connections to the Vietnam war. The film then took a decade to reach the screen. According to Linklater and Ponicsan the film is essentially the novel.

The film opens as Doc (Steve Carell)  wanders into the bar owned by Sal (Brian Cranston in a role almost certain to get him an Oscar). Sal doesn't recognize Doc at first, but then suddenly the 30 years melt away and their shared past in Vietnam returns. They spend the night drinking, and in the morning Doc takes Sal to meet up with Mueller (Laurence Fishburne) a preacher in a nearby town. It is then that Doc springs his plan upon them, would they go with him to receive the body of his son who had been killed in Iraq. Thus starts a road trip that might bring closure to all their lives.

Watching the film one can't help but see there are problems with the film. Set in 2003 things appear that that shouldn't be there in that year. There is stilted and awkward dialog about the war in Iraq, about cellphones and some details that ultimately don't mean much. There is a "boo hiss" villain who wants to bury Doc's son at Arlington. And Sal's dialog can be a bit much. The bits are annoying, but if you can see past them there is a deeply moving here.

Operating on multiple levels LAST FLAG FLYING is a beautiful film about loss. Not just that of a son, but of our past. Choices made in the past haunt everyone and as a result everyone has to deal with something they lost, even if it is only their way through life.

There is a wonderful examination of the stupidity of modern warfare and all that it entails. By linking wars past with wars present we see the modern cycle of the destruction of our youth that has haunted the last 50 years. Why are we fighting? No one knows. What does the government really want? Again no one seems to know. While the dialog about the specifics of the present day war sounds awkward, the point isn't the details but the endless cycle.

Running rampant through the film is the notion of myth versus reality. Cranston's Sal always wants the truth to be told.  Doc's son supposedly died a heroic death, but the reality is different. Sal forces the truth out which extends the road trip-but at the same time a side trip along the way forces even Sal to ponder if a lie isn't sometimes better than the truth.

And there are the notions of God and religion that permeate much of the action...

Ultimately though the film works because the cast sells it. Cranston, an almost sure-fire Oscar contender, is big and bold and brash. He is a force of nature and that dominates everything for better and worse. He is a ball of anger, but inside he is a lovely man who just wants to make things right.

Laurence Fishburne is his equal as the man of God, Mueller. Unwillingly dragged on the road he is a beautiful counter balance to Cranston. One can easily forgive Linklater's branding of the pair as a kind of devil angel on Doc's shoulders simply because two minutes in we simply like the pair.

And then there is Steve Carell, the man at the center of the film. His is an incredibly understated performance. It is man lost in his own world, desperately looking for friends. He is largely silent for most of the film, and often off screen, so he isn't noticed but at the same time his occasional lines and deeply internal performance (its all in the eyes) holds the film together and results in our being rocked when he reveals his inner pain.

Through the work of these three fine actors the film reveals itself to have a loud resonate inner truth. We move through the tale not via the details but through the arc of their lives. Watching Carell, Fishburne and Cranston we realize that what we are watching is not the ebb and flow of fictional characters, rather we are seeing the ebb and flow of the humanity of the past half century and on some other level all of it.  The oft repeated line that we all grieve differently is repeated in the film a couple of times. LAST FLAG FLYING is a wake not only for Doc's son but all our children. It is a wake for our pasts, of our choices and our lives. It is a film about who tragedies break us apart- and bring us back together again.

In a weird way the film is on odd mix of big budget (relatively speaking) film and an inde one. The errors in the film are in the flash of Hollywood, while the soul, the truth is something you only see in inde cinema.

I was moved by the humanity and truth at the the core of LAST FLAG FLYING.  Actually I wasn't so much moved but driven to my knees and cried as my heart broke and was healed.

I love this film, flaws and all.

An absolute must see. Also one of the best and my favorite films of 2017
Posted by Steve Kopian at October 31, 2017