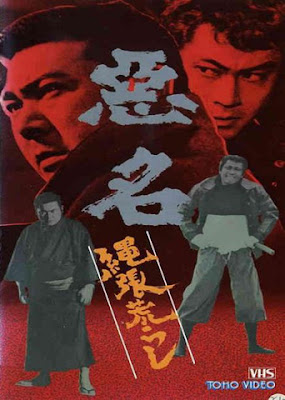 This is the final film in a long running series called, in English, Bad Reputation. I have no idea about how any of the other films are, but this one is pretty good.

Set in 1937, this is the story of Asakichi, who is played by Shiuntaro Katsu, best known as being Zatoichi in 26 films. Asakichi has been disowned by his father for gambling, so he heads off to make his living in cockfighting. He, in quick order, wins some money, takes up with a fallen geisha and quickly comes in conflict with the yakuza. Besting their top man, Asakichi, is drawn into the life of a yakuza despite his efforts to remain outside of it.

This is, for my Western eyes, is far from a predictable film. There are moments of tenderness that are followed by explosions of violence. Nothing happens neatly, every choice makes life more complicated. Nothing is as anyone expects it to be. Despite a slow pace, I was sucked into this movie. I wanted to see what happened next, which I think is the sign of good story telling. The choices our heroes are faced with seem real for the situation and its a pleasure to see how things move along despite their best efforts to control them.

The flaws in the film are few. Certainly this film moves at its own speed, which is fine, but I would have liked it to have been a bit more speedy. The other flaw is that Katsu seems a bit long in the tooth for his role. I really didn't notice it until there was talk of the draft and I wondered why anyone would care about a 43 year old guy (Katsu's real age at the time). This last point doesn't detract from the film, it just makes you wonder about how old these guys should really have been. (Then again the print I saw was subtitled fairly, there seeming to be more lines of dialog than subtitles on the screen.)

Definitely worth seeing if you like good films, especially ones that show you a different time and place.
Posted by Steve Kopian at October 27, 2017