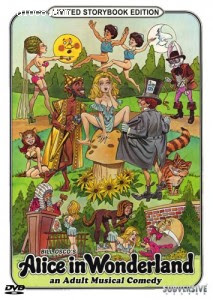 This adult version of the classic Lewis Carroll tale is much better than you might expect. Here Alice is a virginal librarian who falls down the rabbit hole and learns to love sex and her own self image.

Made at the time when adult films were creative endeavors with plots instead of just a series of sex scenes, this is a good looking little movie more akin to the low budget films of its day. Despite what you may think this film actually has a good script with funny jokes and good songs. Its an naughty little tale for adults. If you're wondering whether or not my recommendation is a good one or not consider that the film was pretty much only available in its non-hardcore version for the better part of the last three decades simply because the film stands up without the sex, which is how I first saw the film years ago on cable TV.

The relatively recent home video release on DVD put back the sex (in horribly grainy inserted clips) which makes it clear the removal of the shots was the best choice all around. If you're an open minded adult with a taste for something spicy I can heartily recommend this little film as a nice diversion (though ignore the hardcore insert shots)
Posted by Steve Kopian at October 28, 2017