MFA opens Friday and you must see this 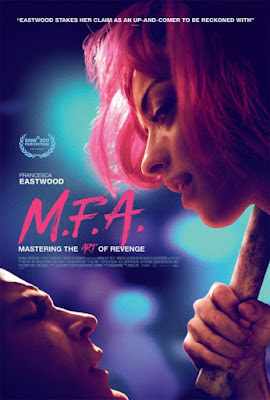 I saw MFA at Fantasia and it rocked my world. With it opening Friday I'm reposting the review.

Noelle is an introverted Fine Arts Student who keeps pretty much to herself. Invited to a party she is raped by a guy she had been infatuated in. Getting nowhere in reporting the crime, the camps officials want to play the blame game, she takes matters into her own hands and begins hunting the predators herself.

Painful unpleasant film is not for all audiences. This is a film that ends badly for everyone. That statement includes the audience who left twisting in their seats through most of the film either through it's use of violence or the way the film throws up real questions about how we treat victims of sexual assault.

And the violence will get a rise out of you. The rape of Noelle is one of the most brutal and ugly things put on screen. You will look away, and even then it will haunt you for a long time afterward. Credit director Natalia Leite and writer Leah Mckendrick for giving us an act that we can't forget. Even now hours after seeing the film that one sequence is like a bludgeon to my brain.

As an emotional scream about sexual violence this film is top notch.It is a damning indictment of a society that allows women to be abused with limited support and a system that often blames the victim.

But at the same time the film wobbles at times. The problem is that the change of tone as Noelle becomes an avenger doesn't always integrate completely with the seriousness of the other half of the film. It muddies the water and doesn't make it clear what exactly it wants us to feel.

Regardless it is film that is nigh impossible to shake. Recommended for those who think they can handle it's assault on the audience
Posted by Steve Kopian at October 08, 2017