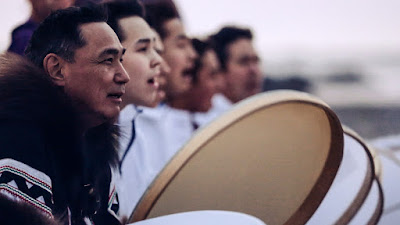 One of the twin opening night films at the Portland Film Festival this year WHEN THEY AWAKE is a wonderful look at the current state of indigenous music and how the newest performers are taking the traditional way of doing things and bring them to the world.

There is very little I can say about this film other than see it. Powered by a seemingly unending sonic engine of some of the best music of any sort out there WHEN THEY AWAKE not only rocks and rolls but just dances its way into your heart. I was hooked from the opening frame and I bopped in my seat until the final credit.

While the film perfectly stands proudly on its own it would make a kick ass double feature with Catherine Bainbridge and Alfonso Maiorana ‘s RUMBLE about how the indigenous performers influenced modern music. One is past the other is the glorious present.

WHEN THEY AWAKE plays tonight and tomorrow at the Portland Film Festival.
Posted by Steve Kopian at October 31, 2017