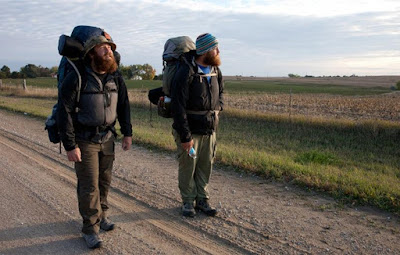 World Premiering at the Tellluride Mountainfilm Festival and playing soon at several other festivals ALMOST SUNRISE is the story of Tom Voss and Anthony Anderson, two veterans who decide to walk across America hoping to find a way to heal themselves by spreading awareness of PTS and the fact that 22 vets kill themselves everyday.

We have to applaud Michael Collins for making a film that genuinely will move you to tears. To be certain there are a couple of big moments where you would think you would react emotionally, however, quite unexpectedly, there are several moment in ALMOST SUNRISE where I was reaching for something to wipe my eyes, not because there was some great cathartic moment going on but because I simply felt something for Voss and Anderson as fellow human beings and not characters on the  big screen. These men are our friends and family and we are moved.

Collins has a made a film where life in all its small moments are on the big screen and we are so much better for it. For example the inter-play between the men and their families is absolutely priceless. Collins doesn't over use sequences  or discussions of the men as military people, we know who they are, that's why we are hearing these stories, rather he cuts things so that the men and their families are seen as families to the point where if you didn't know what the larger context was you would think its just a family drama. Its an achievement that makes us care about Voss and Anderson so much more than if the were simply soldiers. They are ultimately us, or our sons or brothers or husbands.

Michael Collins has moved away and shaken things up so we are seeing it all in brand new way. Not only are we seeing the the story of two wounded soldiers with fresh eyes but  Collins has managed to make the story much more universal. As he had done with his earlier film GIVE UP TOMORROW the plight of one man, or in this case two men. Not only has Collins made the two men part of our family by showing us theirs, he then takes the next step by bringing in other people along the way. What Voss and Anderson experienced and are fighting for is for all soldiers everywhere - and these men and women are just like us as well

ALMOST SUNRISE is truly special and must be seen.

The film was the opening night film last night at Telluride and it screens  tomorrow and Monday. For more information and tickets go here.

The film plays June 11 and 13 at the Human Rights Watch Film Festival in New York. For details here.

The film will also play later in June at AFI Docs.