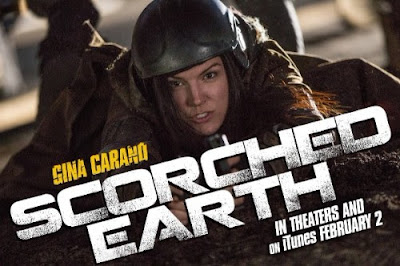 Gina Carano stars in SCORCHED EARTH a post apocalyptic western (of sorts) about a bounty hunter who heads off to try and capture or kill a man named Jackson with whom she as a past.

A good cast, some good characters and some good action are  the reason to see this futuristic adventure. Working with a script which tries to hide a messy film  of western cliches in a science  fiction clothes the cast invest their characters with enough presence that you'll want watch even as the film stops making sense.

The problem with the film is that the world the film operates in makes no real world sense. Set hundreds of years in the future cars, weapons and other things look current. The world itself is inconsistent with things like the need for air filters coming an going depending upon the moment. And you get things like Carano  deciding to pretend to be a dead bad girl because she is going to wear a mask but  then she never does. More amazingly the deadly hide out isn't anything she couldn't have just walked into on her own.  Its infuriating.

And somewhere along the way you either have to go "to hell with it" or you turn it off. I said to hell with it and just went along to the end.

I like SCORCHED EARTH but I don't love it. Its a coulda woulda shoulda film that would have been so much better if they scrapped the post apocalyptic bullshit and just made a straight on western

Worth a look somewhere down te road but nothing you need to rush out for.
Posted by Steve Kopian at February 02, 2018