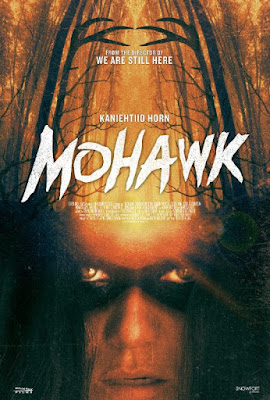 MOHAWK is a visceral cinematic gut punch with a sharpened bone dagger. It is a carefully constructed thriller that will leave you staring at the screen wondering what the hell just happened (in a good way).

It is 1814 in upstate New York. America is once again at war with England. Englishman Joshua Pinsmail is attempting to get the Mohawks to break their treaty with America and side with England. He not only wants to help his country but get a better life for his lover and her people. Things however become complicated when Calvin Two Rivers, the brother of Oak, Joshua's lover, massacres a stockade of sleeping Americans. What was supposed to be the method of last resort begins sending out unexpected shock waves. Things then go from bad to worse when a detachment of American soldiers show up with hell close behind.

And hell it is. Once Mohawk gets into high gear and away from the too talky set up the film morphs into a high octane chase film with stomach turning realistic violence. Blood flows, brains are splattered and bones broken leaving those on screen dead or dying and the the audience sick. Director Ted Geoghegan has made a film that doesn’t shy away from showing the nastiness of life and death of two centuries ago. People die horribly. People die slowly drowning in their own blood and viscera. There are no quick deaths. It’s a graphic analog of the court room scene from William Friedkin’s RAMPAGE where we sit in silence for as long as it took to strangle someone to death.

Don’t let my mentioning of blood fool you, there is a hell of a lot more going on in MOHAWK than the violence. First and foremost the fact that this is a wicked chase film where who is the cat and who is the mouse is always changing. While moving at slower pace than modern action films there is still a real sense of urgency to what happens. Lives are in the balance and once cannot just burst in and spray everyone with a machine gun. The guns are a one shot and if you can’t reload quickly there is going to be trouble. There is one shoot out early in the film where people are more or less standing around at close quarters shooting, missing and then reloading. It makes for an odd affair for anyone expecting a John Woo style shoot out, but the fact is this is what gunfights were in the early nineteenth century. Once the one and done mentality sinks in and the audience understands it the suspense goes up because you realize that you have to pick your shot and have a second plan…and a third…and maybe a fourth... it makes for a nerve jangling affair as we are forced to reconsider our modern action movie mentality.

While my weakness for well-done action films will have me thinking of MOHAWK as primarily that, the script by Ted Geoghegan and bestselling novelist Grady Hendrix is aiming to do more. In a talk with Ted on Twitter he described the film as a "sad, angry, anti-colonialist thriller about proto-Trumpers" but I don't think the description is wholly apt. To be certain the film is sad, angry and anti-colonialist, but to connect it straight into Trumpers sells the film way short. We have to remember the film was being put together before the current President was ascending from his cesspit to the swamp. There is a complexity to events that belie it simple being anti-Trump. Events are put into motion by a slightly self-serving individual with good intentions. He wants to help England while trying to free the Mohawks. From there we end up with a series of events where everyone missteps and finds their lives further imperiled. In a weird way the only ones who come out on top are the only ones who don’t act- the Mohawks off screen that the trio of Oak, Calvin and Joshua are trying to reach. The reasons why everyone missteps stupidity, racism, family, love, love of country, following orders, all add shading and paths to ponder as to whether things could have played out differently.

To be honest this is a film that is going to require multiple viewings to full disentangle thematically. The reason for that is watching the film the first time through you don’t really have much of a chance to ponder much beyond what is going on. I was simply carried along with the action and the motion. I found it hard to make notes because I was too engaged with what was happening on screen. However I had to force myself to write things down because I knew that I was going to not only have to review the film but conduct interviews connected with the filmmakers.

While I love most of MOHAWK I am not so enamored of the opening section of the film. Too much of the set-up is done in exchanges of dialog that don’t feel natural. The exchanges between the various characters is exactly how people who are in the middle of something wouldn’t speak because they wouldn’t need to explain everything. Thankfully the problem only lasts a couple of minutes, just long enough to allow the plot to kick. Once everyone, including the audience, is up to speed the film just goes straight on to the end.

This is a great film. It’s a super change of pace that will delight anyone who wants a cinematic change from the big budget Hollywood productions.

MOHAWK opens in select theaters and on VOD Friday
Posted by Steve Kopian at February 28, 2018