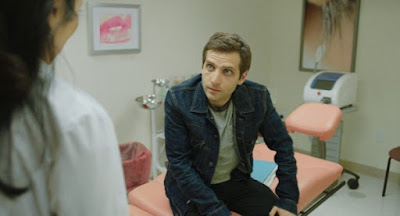 Spencer is a stand up comic and actor living in LA who returns to his upstate New York hometown to see his five doctors armed with a large binder detailing his symptoms. As his friend Jay drives him around town, Spencer attempts to avoid his friends and family while trying to figure out why he actually came home.

Funny small scale road comedy is for the most part a delight. Working best in the small moments and throw away lines 5 DOCTORS worms it's way into your heart despite the prickliness of it's lead character. To be honest despite laughing all through the film, it took me awhile to really warm to Spencer who is a bit too self absorbed. Despite the initial bumpiness, the laughter and the charming characters around our hero worked their magic and I was about half way into the film when I realized that I was going to have to investigate what the release plans for the film are because this is a film I want to share.

5 DOCTORS hits VOD Tuesday and is recommended.
Posted by Steve Kopian at February 24, 2018