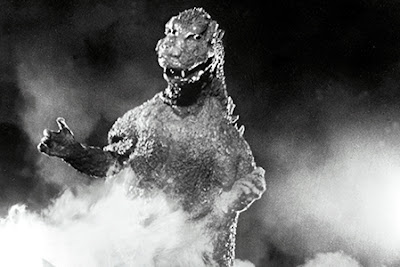 This piece came out of an interview I did with Nobuhiro Hosoki for Yahoo Japan. It is my thoughts and feelings on the original GODZILLA which screened last week at the Japan Society. It was the first time that I had ever seen the film on a big screen. After the screening Nobu was asking people their reaction to the film some 64 years on

I first saw GODZILLA in the American cut of the film back when I was a kid growing up in the 60's and 70's. I can't say if saw one of the later Godzilla films before this one but this was the one that stuck in my head, even at 4 or 5 years old. There was something about the moody black and white photography tat always stayed with me, this was always the Godzilla as a kid because it was so serious.

Growing up there was always talk about the uncut version, but it being before home video or a trip to Japan I didn't get a chance to see the original cut until the 1990's. It was a kind of revelation because even though the Raymond Burr version was a serious film but the actual full version was kind of took your breath away since it clearly was dealing with the issues of the war and the atomic bombings. Once you see the original version it's hard to go back the American version since so much is down played..

I am a huge fan of the films, however until last Friday night I had never seen the film on the big screen. Seeing it on the big screen was a kind of revelation. Not being distracted by things in my living room you really focus on what the film is doing. It is not a "monster smash" film of the later films in the series, but it's a film about a serious subject. It is a film that stands apart from pretty much anything else that followed. In a very real sense the film is a kind of blood brother to the film HIROSHIMA which the Japan Society ran two weeks earlier. Both film wrestle with the aftermath of the bombs that were then still killing thousands.

Going into the film I knew what the film was intellectually but I don't think I really knew it emotionally. I didn't expect to get hit by the waves of emotion because I've seen the film so many times before. I certainly didn't expect the dead silent audience at the screening. Yes there were a few laughs late in the film but mostly the sold out audience sat and watched, carried along by the film's power.

Even within the 60 year long series this first film stand alone, more or less. Almost everything that followed was never really about anything other than the distraction of men in suits fighting. While some of the films in the 80's and 90's may have danced around notions of militarism, atomic energy and the war they were doing so from the safe distance of decades onward when time had altered perceptions and people kind of forgot what Godzilla being born of atomic devastation really meant.

It wasn't until the two most recent films, 2014's American restart and 2016's SHIN GODZILLA that we had a return to deadly serious looks at Godzilla as a force of nature spawned by man's misdeeds. Though in point of fact probably only SHIN GODZILLA is a true sequel to the original since it most directly mirrors the first film in it's themes and bleak outlook. If you need proof that the latest two films are blood relations to the first film consider that much of the criticism two films received, at least in America, People complained that both films are not really about the monster but about something other than the monster- which is what the first film was always about.

Sitting in the Japan Society I tried to wrestle with the fact that Roger Ebert  panned the film. Ebert hated the effects and it's preachy style.  While I can understand his displeasure his complete dismissal of the film on anything other than a historical level makes me think this may be the biggest misstep in Ebert's career. Its one of the few times when reading his reviews I got the feeling that his personal dislike for something over rode his critical thinking. Even his accepting it in a historical historical context seems to me to be something that he was doing off-handedly  and not because he truly understood.  I'm curious what he would have made of the film HIROSHIMA which the Japan Society ran two weeks before.

Fortunately GODZILLA is too well entrenched in world culture to have to worry about the words of one man to stand or fall. And while it may not be a technical mater piece it is one of the cultural touch stones of world cinema. In the film the Professor Yamane talks about the need to study the monster so we can learn how to survive- ultimately he needn't have worried since after 64 years the beast is still alive and still shaping how we see the world.
Posted by Steve Kopian at February 08, 2018