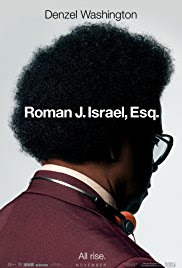 Denzel Washington is in the running for an Oscar as the title character in a film that kind of came and went rather quickly from theaters.

Roman J Israel is a hard working attorney who fights for the underdog. When his partner has a heart attack he is forced to confront what has really been going on in his firm. Moving to a bigger firm Israel has a chance to make some money but it might have a heavy price.

This is a messy drama that was recut  after premiering at Toronto. I'm not how the cuts changed the film but as it stands now this is a good drama but nothing to write home about.

On the other hand Washington's performance is killer. It is hands down one of the best of his amazing career and it is the reason to see the film. Simply put it is one of the best performances you will ever see with so much going on in the eyes and with his body  that you won't believe he is acting. He is rightly in the running for an Oscar and wrongly being counted out as a front runner for the award.