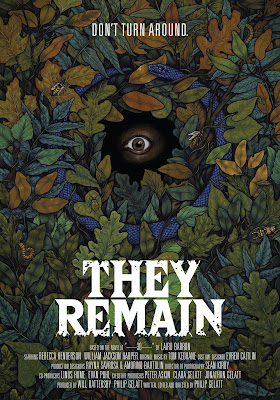 Phillip Gelatt’s They Remain is a frustrating film. It is without a doubt a very good film. It hits all the right notes generating a good amount of suspense but at the same time it doesn’t do anything with its story that we haven’t seen before.

The plot of the film has a pair of researchers going to investigate the site of a notorious massacre. A Manson-like cult murdered hundreds of people and now the site is the scene of weird animal and environmental happenings. The pair is to investigate what is happening.

If you like weird horror and culty films then you’ve seen this before. Yes the details are different but the basic plot is one we’ve seen before. While it’s not fatal it takes what could very well be one of the best films of the genre and turning it into just a good one. I was several steps ahead of the film and while I enjoyed the hell out of it I would have loved it had it simply surprised me somewhere along the road.

Whether you’ve seen this sort of thing before or not I highly recommend the They Remain. You will enjoy it- how much will entirely defend upon how often you’ve been down this road before.
Posted by Steve Kopian at February 27, 2018