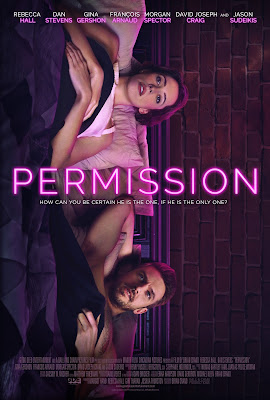 Ariela reported on PERMISSION last year at Tribeca. Here is a repost of her review

Anna and Will have been together for years. They are madly in love and Will is thinking of proposing. They have both never been with anyone else. At Anna's birthday party, her brother's boyfriend says they should sleep with other people before deciding they want to be with each other forever. They laugh it off, but then they(or rather mostly Anna) suggests maybe they really should give it a try. That they know they love each other so what's the big deal? Will says "do we have an open relationship?" She says "the relationship isn't open!"

There is also a second story within the film. Anna's brother wants to adopt but his boyfriend isn't so interested. I think I might have liked this part of the story more.

What happens when you mess with a perfect relationship? There really are only two possibilities. I won't spoil it though.

I would say skip it. The film wasn't bad, but I think the story itself just annoyed me.
Posted by Steve Kopian at February 05, 2018