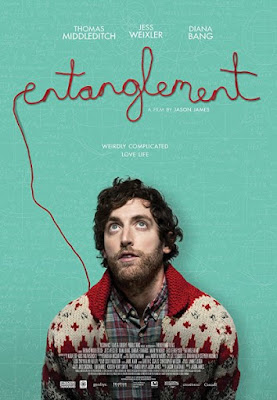 I saw ENTANGLEMENT when it played the Brooklyn Film Festival. With it opening today ere is the reposted review

While searching for the meaning of his life Ben discovers that he almost had a sister. When he meets the woman who might have been things in his already weird life get weirder.

Quirky (in both good and bad way) low key comedy is either going to thrill you or annoy the hell out of you depending upon which moment you are in. Blame both writer Jason Filatrault and director Jason James who take their notion that everything is entangled in everything else and run with it to the point that many sequences just are either over done (the opening attempted suicide sequence) or are just going weird for reasons I'm not sure of. The result is a film that doesn't quite work because it's trying way too hard to be thoughtful, clever, funny and touching all at the roughly the same time. The result is a film that is like a friend who you want to slap because they just won't stop.

I like the film I just wish it wasn't trying so damn hard to be great.
Posted by Steve Kopian at February 09, 2018