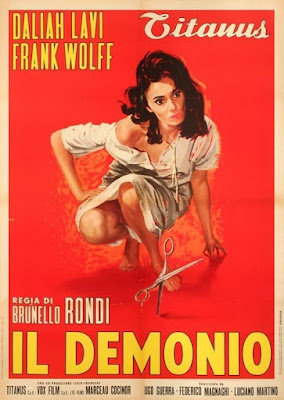 Brunello Rondi's THE DEMON is one of the lost classic horror films. Anchored by a killer performance by Daliah Lavi it is film that haunts and disturbs you you with its quiet power. How and why this film has not gotten on to the radar of most horror fans is beyond me.

The plot of the film has Purif (Lavi) using witchcraft to try and capture the heart of the man she loves. When he rejects her she ends up possessed. The townsfolk then have to try and free her from the demon.

Shot in stark black and white this is not a "jump out and go boo" horror film. This is quietly disturbing film where each shot and sequence disturbs for a variety of reasons. It is a film where the discomfort and unease builds from scene to scene and shot to shot. We are always in this world, the real world and the demon could be the imaginings of a disturbed young woman.

THE DEMON is very much more than the sum of it's parts. This is a film where every second and choice builds on every other to make a film that leaves you quietly disturbed. 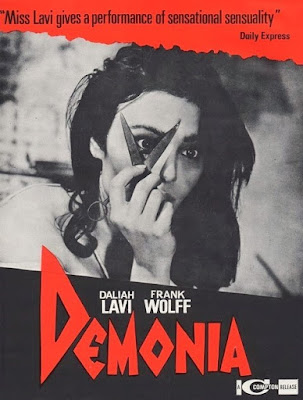 Front and center is Carlo Bellero's cinematography. Stark monochromatic images of Southern Italy reduce the world to a place that is very black or very white. The landscape is barren and empty except for the odd building or tree. We are placed out of time in a world that could be now, could be then or even long ago. It is a world of dreams, more a half remembered one from 3am when we wake in a a kind of unshakable terror.

The sound design is also chilling. While Piero Piccioni does supply music, it is the sounds of voices, bells and of every day life that cut through and leave us on edge. I was left uneasy by all the sounds.

And of course there is the anchor at the center Daliah Lavi as Purif. A performance of quiet power she disturbs us not because she goes over the top but because she keeps it real. Is she genuinely possessed or is she simply love sick? We can't know. There are clues that be could be taken either way but ultimately we are left to ponder ourselves. In any case Lavi kicks ass and takes names as she makes us both fear and sympathize with her character. Haven't we all been so in love that we would do anything to make it what we want? Lavi gives us one of the great unsung performances.

And I have to say again this is not a jump out and scare film but one of quiet unease.  You will be left squirming in your seat with no real relief.  Yes we do get a spider walk that probably influenced the one in THE EXORCIST (though it is more chilling here because of Lavi's facial expression), and the potential visitation of the dead but mostly we get slowly building dread.

Why isn't this film better known? This is a film that horror fans would eat up like CARNIVAL OF SOULS.

Highly recommended. THE DEMON is available from Sinister Cinema. 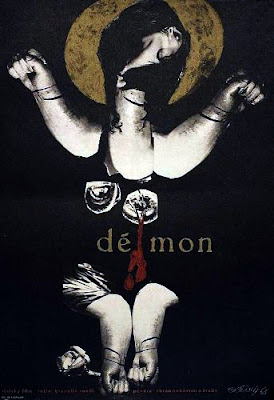