Apologies to NYICFF for not reposting the review of  what they are screening as HORUS, PRINCE OF THE SUN in time to help fill up the screening earlier today at the festival. While the audience was a good size the screening should have been standing room only. I didn't realize that I had indeed reviewed the film but under a different name, THE LITTLE NORSE PRINCE which was the title it was reissued on DVD in the UK.

In any case I found the review from 2011 and I'm now reposting it so that you all might consider buying a ticket or two for the remaining screenings on March 10th and 11th at the IFC Center and the Museum of the Moving Image. (Tickets can be had here)

And one last note- if you have seen the film before but only on TV then buy a ticket and go see it because the film looks awesome in true big screen widescreen. 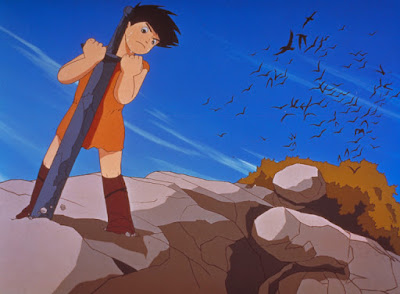 Isao Takahata is the director of the animated Grave Of Fireflies, and founder of Studio Ghibli. His first feature film is set nominally in a Norse country, but it sure seems like old Russia to me. Hols, a young boy/man/teenagerish kid, lives with his father on the edge of an ocean. Not long after he removes a thorn (actually the sword of the sun), from a giant rock man, Hols' father dies. He tells his son the story of how a devil named Grunwald had spread evil in their old village and caused things to fall apart. Hols' father, wanting to keep his then infant son safe, fled into the wilderness. As a dying wish he urges Hols to go back and find his people. Traveling with Coro (his friend, who is a bear), he sets out to find them. In the process he meets Grunwald, who wants Hols to join him and Hilda, a girl with a lovely singing voice and a dark secret.

Moving like the wind this is an 80 minute movie that has enough plot for at least another hour. This isn't a bad thing since the film keeps moving at all times. It's a beautiful film, filled with an endless series of set pieces. Actually I don't think there is a bad sequence in the entire picture. To be honest the script is a real mess. It doesn't move at times so much as lurches from thing to thing. The dialog is also often stilted, which I'm guessing is the result of too faithful a translation from the Japanese (there are times when you really need to reword things. And no this is not a bootleg or a print from Asia, it's the official UK released DVD).

Messy script or no, I think this is a masterpiece. It's a great grand adventure that hooks you and drags you along for 80 minutes. As I said the set pieces are spectacular and the sense of magic is wonderful. We have a hero who is truly heroic and some characters who are very close to being real. The design of the film has echoes of later anime projects, not just Ghibli, which helps give it a nice feel of familiarity when it's not being wholly original. Strangely the film feels very much like the Russian fantasy films of directors like Aleksandr Ptushko. It's supposed to be set in a Norse country but the design of the costumes is very Russian.

I really liked this a great deal. To be certain it's flawed, deeply, but there is something about the central story thread that allows the film to survive as something wonderful. I recommend it.