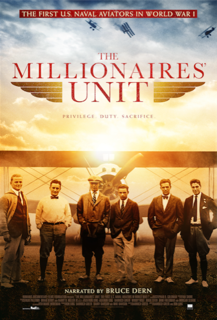 THE MILLIONAIRE'S UNIT is a portrait of the Yale underclassmen who saw the approach of the first World War and took steps to form the Navy Air Corps long before the war came knocking on the door of the United States. Chronicling the men before during and after the war the film is full of photographs, remembrances, personal papers and beautiful modern day flights of antique planes. It is a solid portrait of men who forever changed the American military.

Made by filmmakers who are all relatives of the original fliers this is film that has been made with great love and care. They clearly want to pay tribute to their relatives and it shows as we are shown the private lives of the men in ways most similar films never do. These are the men who fought and died in defense of their country and --- wants to make sure we never forget that. It is this attention to the people behind the names which sets this film apart.

It is also what makes the film a little long. Running about two hours the film the film can seem a little long thanks to the wealth of information, including the romances, of many of the men. Its nota bad thing because it makes the men that much more human, but to be honest I felt the need to pause the film and sstep away from a little bit.

That small reservation aside this is a really good documentary and recommended when the film hits VOD tomorrow.
Posted by Steve Kopian at February 12, 2018