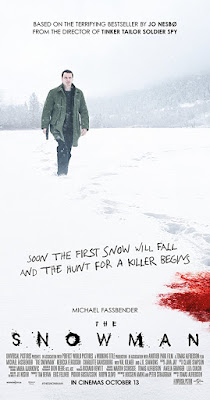 I have no idea about The Snowman. Based on the seventh Harry Hole novel the film has something to do about a killer who decapitates his victims and replaces them with snowman heads, or something. Is it good? Is it Bad? It’s up to you.

Its dark and brooding and missing details due, according to the director, in large part to the fact that quarter of the script was not filmed. I can buy that since as everyone has pointed out plotline comes and goes at random. I have no idea if a serviceable film could have been cut from the existing footage but I’m of the opinion either they should have tried harder or just scraped it. What's here is interesting in fits and starts but it never comes together owing to the very real sense that stuff is missing.

On a personal note I think it’s a bit too brooding. Is anyone happy? Apparently not. Does it matter? Probably not.

Is it a good film? I have no idea. I don’t think it’s the full on disaster of the reviews but I don’t know beyond that. That the film is running around 5 out of 10 at IMDB is intriguing because clearly some people like it. My advice is give it a shot if the idea intrigues you.
Posted by Steve Kopian at February 13, 2018