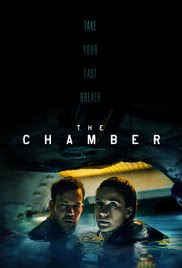 Small submarine is commandeered to help retrieve an object at the bottom of the ocean. It would be so easy except that  it is under waters controlled by North Korea. As the sub begins it's search things begin to go wrong beginning with its support ship being boarded. As the crew tries to figure out what to do further complications result in the sub slowly flooding.

Low budget thriller is more talk than action but don't let that put you off since THE CHAMBER is a tense little confection that is likely to keep you from ever going in a submarine. Propelled by excellent direction and a choice cast the film puts keeps you in the thick of things to the point you may want to get up out of your seat and go to the lobby just so you don't feel confined.

While not without its flaws the film still manages to grab you by the throat and keep you watching. Definitely worth a look when the film hits VOD and select theaters on Friday.
Posted by Steve Kopian at February 20, 2018