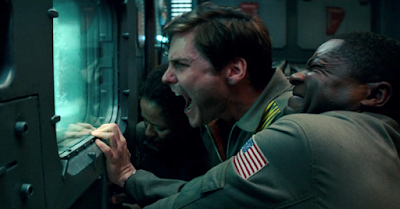 I initially started the film after the Super Bowl and then realized it was too late to finish. I enjoyed what I saw but knew I would have to go back sometime later.

Having gone from start to finish I’m not sure what I think of the film. While it most certainly is a wonderful B level science fiction horror film on it’s own terms, on any other level I’m not sure.

The plot of the film has group of scientists heading up to a specially built space station in order to conduct an experiment to create limitless energy. After two years there is success followed by catastrophic failure as the earth disappears. Weird things begin happening and it becomes clear that the experiment has opened up doors to various dimensions and universes.

Early sequences where the crew try to get the experiment to work and deal with the fall out of it are really good. There is a wonderful sense of a group of people in danger. Things however begin to go weird once things begin to go wrong. To be certain the strangeness is really cool but it doesn’t always seem to hang together. It’s as if the filmmakers felt the need to keep uping the ante at every turn. That is all well and good but at the same time the logic fragments too much. Yes, the woman in the wall and the wandering hand are cool but there is too much to process and as Raymond Chandler’s rule of storytelling - essentially you can only ask the audience to believe one unexplained/impossible thing lest you lose them- is broken time and time again we drift off. With internal logic thrown to the wind we disconnect from the plot and begin to look elsewhere with the result that what seemed like a tightly plotted film is revealed as something less.

I know some people think this would have been better without the Cloverfield name, but let’s face it you could change all references and even the monster at the end and you would have the same problems- crappy plotting.

Worth a look for the parts that work but mostly this is a disappointment.
Posted by Steve Kopian at February 18, 2018