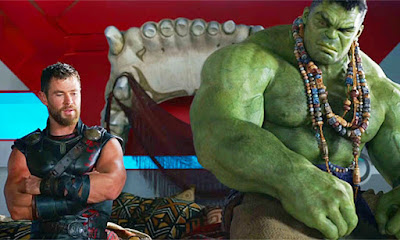 THOR RAGNAROK is a dreadful movie- funny as all hell but it's dreadful none the less.

The film has Hela, Thor's sister and goddess of death returning to Asgard and taking it over. Thor and Loki are banished into space where they meet the Hulk. escaping they return to Asgard fight Hela and end up destroying Asgard.

Lets be real the plotting is awful. Things happen just because. While the over all plot is okay, the fact that the film constantly is being side tracked to have this nice wacky moments just kills it. Never mind that the humor is screamingly funny, I was left wondering why I was laughing at it all.

I also despise that this is yet another Thor film which basically does nothing with the huge cast of characters in Asgard. Pretty much all the great characters die without a by or leave and things are just moved along without any rhyme or reason. Of course everyone will be able to come back when the Marvel universe is reset with the Infinity Stones after the Infinity War films but for me this is yet another case of Marvel thinking nine steps ahead instead of concentrating on the here and now.

Don't get me wrong, I love the humor and I love the character interplay. There are are some great moments here- the problem is that over all the plot id driving forward at a breakneck pace. It never fully develops any real cohession it is simply moving things to bringing Thor and Hulk and the others back to earth for the next Avengers film.

In it's way the film is an indication that the Marvel films have finally become like the Marvel comics themselves have been for the better part of the last two decades-flashy four color stories that are no longer remotely aimed at telling a good story but instead are firmly aimed at producing as much revenue as possible by crossing making fans have to buy it all to know what is going on.

A hugely disappointing film that is worth seeing for the laughs but is in no way emotionally satisfying if only because Marvel will ultimately fuck it up in the next Avengers
Posted by Steve Kopian at February 16, 2018