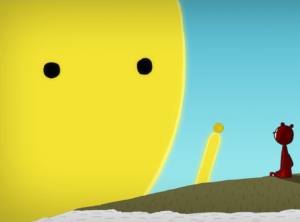 I love the shorts at the New York International Children's Film Festival. Every year they present some of the best films of any length at the festival and I'm always heartbroken that more people can't see the wonders of the films.

Normally I mainline a whole bunch of the collections in a day or two and write them all up at once but this year I'm seeing the shorts in bits and pieces over the course of the festival so in order to make sure you get out to see the great shorts I'm writing them up as a I see them.

The first collection I saw at the festival was SHORT FILMS TWO and it has some truly magical films in it. 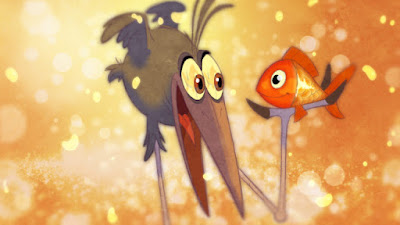 BIRD KARMA world premiered at the festival. This is the first of the new series of shorts being produced by Dreamworks.  The film concerns a bird catching and eating fish and what happens when a golden one comes his way. A true visual piece of art this film is a fine example of the high level of art work being turned out by many animators. As eye candy it is a visual marvel. Having seen the film twice in one day (it played before BIG FISH & BEGONIA) I'm still not sure if it worked. I know that the audience reaction was slightly confused as the ending brought almost no reaction with a couple of quiet whispered questions from some of the people around me during the second screening. Yea the early bits brought laughs but the end brought crickets.

HOME
Animated story of a sheep on a farm and their human grandfather and goat uncle. Its a good little story.

FLY LADY FLY
The worst film of the bunch. A nice idea, a young girls wants to use a drone so a parrot with clipped wings can fly, poorly acted and not particularly well done. Frankly I love the idea but the execution and the choice to make everyone but our heroine goofy wrecks the film.

IRON HANDS
Crying out to be feature film this is the story of a young girl who wants to join a weight lifting team and the man who helps her. I loved this and wanted to see how it continued on- please some one make this a feature with these actors. 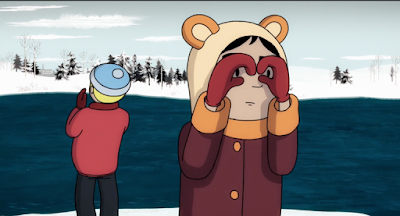 BANGO VASSIL
Charming film about two kids who end up on an ice flow and the surprising person who comes to their aid. This is a great film about how people who think they shouldn't get along can find a common ground.

IF YOU FALL
An eight year old navigates learning to ride a bike while her parents struggle to find a place for each other in their lives. Its a nice little film.

ZARA AND THE OTHERS: GORILLA BRAINS FOR DINNER
Zara is a young girl with an off beat family which makes it tough for her to make friends. To be honest I'm not sure what I think of this weird little gem owing to the fact that I'm not quite sure that it's spiral from full out weird to reality works. Most definitely a one of a kind film, but perhaps this would have been better in the Heebie Jeebie collection

THE THEORY OF SUNSET
Hands down one of the best films of 2018 of any length. Its a film that follows the course of a day from sunrise to sunset. It is also deeply wonderful and incredibly profound. I can not say enough good about the film other than it is wickedly cool and a must see. 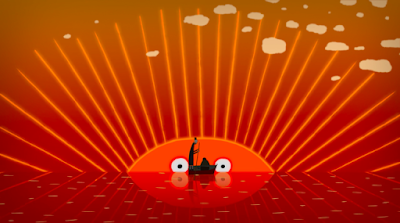