Breaking Point: The War for Democracy in Ukraine (2017) 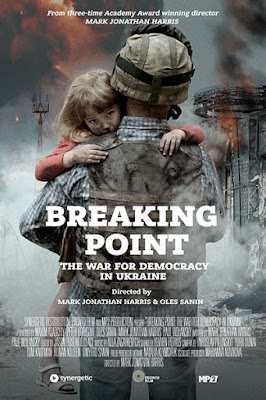 In a world where Russian interference is front page news, three time Oscar winner Jonathan Harris's BREAKING POINT THE WAR FOR DEMOCRACY IN UKRAINE is a vital document and a must see.

Chronicling the struggle for Ukraine to be free from Russian/Soviet control the film is a stirring portrait of a country that, as the first line of it's national anthem says "is not dead yet".  Full of first person interviews and on the ground footage it reveals how forces tied to Russia are seeking to control and loot the country. Indeed the film forcefully reveals how one recent leader took billions from the country.

While the US has to struggle with hackers and influence peddlers, Ukraine's battle is much more violent as the Russians have armed anti-democracy forces and turned them loose in the country to cause all sorts of death and destruction. That the country is still standing is a testament to the spirit of a great people.

You will forgive the lack of criticism concerning the film but there is little to say other than see this film. A beautifully made document it lays out the history of the country and explains why Russia wants to get its hands on the country. It is also a magnificent portrait of a nation that refuses to lay down and die. In its way this is a perfect example as to how to make a documentary.