Capsule reviews: DOWNSIZING, WONDER and MOUNTAIN BETWEEN US 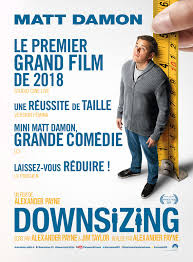 DOWNSIZING
Alexander Payne's first film in several years is a mixed bag. The story of a man who shrinks himself for a better life only to find things don't go as planned is an odd rambling film that doesn't seem to really work. Beginning as a film about trying to find a better life things keep turning sharply until the film becomes a kind of existential exercise in the meaning and purpose of life. I never really bought any of it  as a whole with the result I found it a tough slog.

To be fair I have never much liked any of Paynes's films and I've always been hesitant to see any of them and the only reason I attempted this one was it fell into my lap. To be honest I felt like I lost the two plus hours to the point I'm completely giving up on the idea of ever liking one of Payne's films. 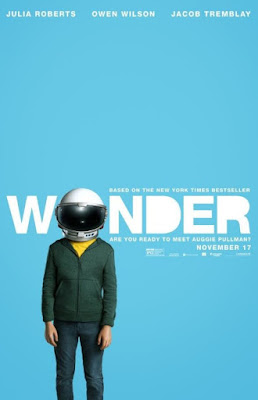 WONDER
Young boy with an odd face is main lined into regular school and changes everyone around him.

Good warm and fuzzy film with Julia Roberts and Owen Wilson is very well done and exactly what you think it is. Did I need to see it? No. Did I enjoy it? Very much so despite knowing ow it would all play out. 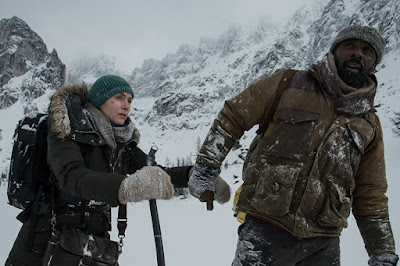 MOUNTAIN BETWEEN US
Way too polished and perfect adventure romance about two people who crash in a small chartered plane and then have to try and make their way out of the wilderness despite injuries and the weather.

Credit Idris Elba and Kate Winslet for making this more than a story that we've seen any number of times before- but take a good bunch away from the film because director Hany Abu-Assad has made a film that is so perfect in every shot and so clean despite being a plane crash that we only buy into it because of the force of personality of the stars. It never feels real and as a result we watch because we want to be sure we know how it's coming out.

This is a film to catch streaming and not to pay for. That said I'd love to see the film remade by a director who makes it all look a little more gritty.
Posted by Steve Kopian at February 15, 2018