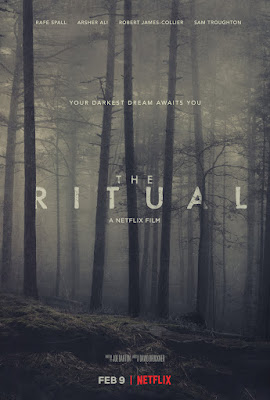 Way better than the typical “there is something in the woods” film, THE RITUAL is definitely worth your time.

The plot isn’t anything you haven’t seen before basically four friends go hiking and encounter something weird in the woods. However the level of the filmmaking and the expert nature of the cast make this worth watching.

To be honest I am sick of the steady stream of similar films. I intentionally ignored the PR people who were banging on the door to cover the film because I didn’t think I needed to see this. Then the reviews started coming in and I realized I had made a mistake- thankfully it is a Netflix release and I got to see it almost instantly.

I really liked the film. It’s a super little thriller and I would have no trouble recommending it for the chills it creates however what you absolutely need to see is the thing in the woods. To say that it left me babbling uncontrollably and feeling disturbed is an understatement.

THE RITUAL is on Netflix and is highly recommended
Posted by Steve Kopian at February 17, 2018