In anticipation of tomorrow's release of the Extended Director's Cut of "Chris Claremont's X-Men", Unseen Films' Ken Fries had a chance to speak with the man himself recently in Las Vegas, alongside writer Gerry Conway. The interview ran roughly an hour long and covers a lot of territory. Because of some technical issues the full interview is being slightly delayed...however, in order to give you a taste of what's to come, Ken has pulled out one quote to share before we spring the whole thing on you later in the week.

Ken asked what artist surprised the writers the most with how they interpreted the plot they had been given. Claremont, upon careful consideration, said: 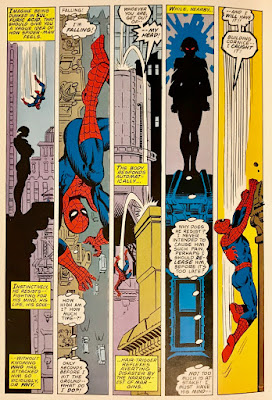 "Frank Miller, I think. Because we did Marvel Team-Up 100. This is back in the days when (then Editor-In-Chief) Jim Shooter's most sensible dictum was "every issue is somebody's first". So if you've never read Spider-Man before, and it's the hundredth issue, how would you do it? So we were introducing Karma (who eventually was a founding member of the New Mutants, the "junior X-Men" title that Chris co-created), and she possesses the mind of Peter Parker. We did a two-page sequence where Frank did totally vertical panels where she possesses Spidey and he falls. Then his body memory takes over and he starts using his powers to save himself. As she's doing this she's learning his powers from him. "Oh, I can do this! I can do this! Wow, I can do this!" So for those of you who've never read Spider-Man before, and don't know how he works, and don't know how Karma works, bingo. It was so wonderful. It was such a brilliant explanation of what a storyteller's craft is, and how to do this right. It catalyzed everything for me in terms of how you have to approach the medium and the audience. If the reader is sitting there saying "always establishing stuff is boring", that's not the concept's fault, that's my fault for not finding a brilliant way to tell it. Even longtime readers should go "Ooh, neat!" 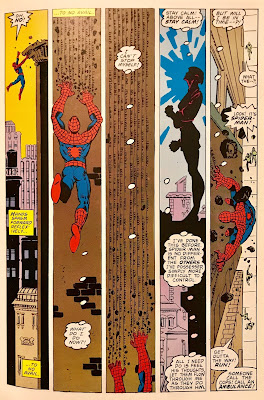