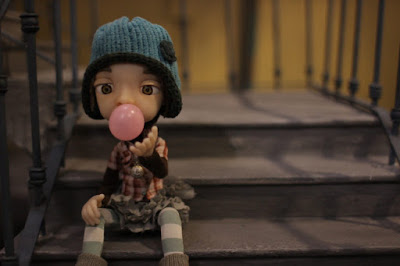 The FRIENDS AND NEIGHBORS: MEXICO collection at NYICFF is one of the best they ave ever put together. It is a stunning round up of short films from a country that has quietly been producing some of the best filmmakers in in the world (there have been how many Oscar winning directors over the last few years?)

This collection, a mix of live action and animation is just amazing. I want these filmmmakers to be snapped up by Hollywood and turned loose on features. I absolutely demand that the animators be grabbed by Pixar and Disney and allowed to showcase their visions on the features industry because based on the work here they would change everything forever.

I don't dare really rate the films because they are all great and picking one over another is pointless since any "lesser" one is only lesser when compared to the cream of the crop.

I will say that the animated films delighted me slightly more than the live action, but that it is the way I roll and because, quite simply the creative vision of their directors push the boundaries of what animation can be.

An absolute must see collection- get your tickets now because there is only two screenings of it and it's a sin.

ELENA AND THE SHADOWS
Incredible stop motion animation about a young girl who sees the world differently after making a friend. WOW and WOW.

THE PINATA KING
A look at a family that makes Pinatas. This is really cool

BZZZ
Gorgeous  film about the relationship between people and bees is a visual delight.

MATEO AND THE CINEMA
A kid who loves to draw makes a movie- at times glorious film about creation.

RAIN IN THE EYES
A girl tells the story of how she broke her arm- amazing animation sets the bar impossibly high when the director is turned loose on a feature.

LUCY VS THE LIMITS OF VOICE
Lucy wonders if the reason er grandfather stopped talking was he had used up all his alloted words.

PINATA LOVE
A young boy makes a pinata- I can't say more- beyond charming- even for a grump like me,

FAR FROM HOME
A teenager tries to help a lost Japanese tourist. Absolutely lovely and touching.

A HOLE
This played the fest last year where I said: Absolutely charming film about a young girl and her friend, a hole. I loved this- its just so absolutely loopy
Posted by Steve Kopian at March 01, 2018