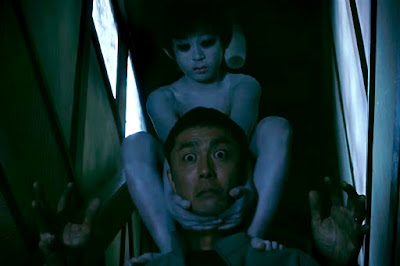 Like Freddy and Jason or any other big franchise cross overs the ghosts from THE RING and THE GRUDGE collide in a film that works in fits and starts and is better than you have heard.

The plot has a college professor saying the only urban legend he thinks could be real is the evil tape that summons Sadako from THE RING. He offers to pay anyone who ever runs across it. Two of his students do when they get a VCR with the tape still in it when they buy one to make a DVD copy of a wedding VHS tape. Cursed after seeing the video, the girls desperately contact the professor who too gets cursed ...and in an effort to possibly survive the curse a medium tell them to go to the house haunted by Kayako from THE GRUDGE.

Its a bunch of scary sequences, all in the GRUDGE  house, wrapped in some merely adequate exposition that ends in the title fight. The result is a film that works in bits and pieces but never comes together since logic has to be turned into a pretzel to make it all work.

Is it worth a look? For horror fans. Certainly if you've seen the 12 or 13 films in each series (yes between Hollywood and Japan there are than many films) you'll want to see this. All others you're on your own.
Posted by Steve Kopian at March 24, 2018