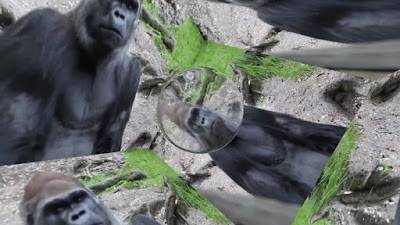 Peter Ward talks about mass extinction and global warming over hypnotic images shot at the Bronx Zoo and The American Museum of Natural History in New York.

Experimental in the extreme this is a film whose visuals are either going to delight you or make you sick. The twisting turning 3D like images  over whelmed me  and gave me a headache. (See the image above? Imagine that spinning and turning and drifting across the screen for 15 minutes)

At the same time the message expressed by Ward that global warming is spiraling us toward a mass extinction is frightening, especially since he clearly explains why the extinctions happened in the past.  I was moved my his words while being pummeled by the films images.

I'm truly uncertain what I think about the film or if I recommend it to anyone other than those ho want a real head trip. (Woe to any film that follows it)
Posted by Steve Kopian at March 22, 2018