A parrothead looks at Escape to Margaritaville on Broadway 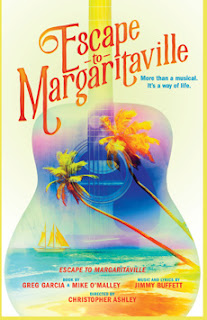 I saw Escape to Margaritaville on Broadway the other night. Because I had heard bits of the score on Jimmy Bufett’s radio station I was wary going in. They had rewritten some songs which didn’t always work. However as much as wary as I was of going I did have a good time. Taking it on its own terms it’s a fun evening. Its far from earth shaking but fun.

That said I have issues... and if you don’t want to know stop reading

While the cast is fine, the set looks good but the show is largely a mess beyond that.

The book is not really good. It’s a boy and girl meet on vacation tale that we’ve seen before but they have twisted and turned every action and every line of dialog to get in the maximum number of puns and references to Jimmy Buffett songs to the point of being distracting. Its designed to bring maximum joy to well versed Parrotheads. So much so that while I and many others laughed and giggled at all the references and the song lyrics turned into lines of dialog many others looked quizzical at why some people were laughing or clapping at a reference.

While jukebox musicals are often cash grabs, designed to make money on nostalgia, if done right (Ring of Fire, Mamma Mia) they don’t feel mechanical . Escape to Margaritaville is incredibly mechanical. While most certainly entertains, it plays like most Jimmy Buffett concerts over the last decade or so, as a mechanical money machine PT Barnum would be proud of. There is no pretense here to be anything more than being good enough to get people coming through the door to sing the songs and buy 11 dollar beers and 16 dollar margaritas from Buffett’s companies.

The biggest problem is that the score is large weak. Its not that the original songs are bad rather that most of the songs have been rewritten- some like It’s My Job to the point where you wonder why the hell they even bothered (if it wasn't a Buffett song this still born bastard version would have been tossed out) . Other songs are barely used with only a couple of lines fleetingly going by before disappearing. I understand modifying some of the songs to fit the play but they did it to almost every song. This is a jukebox musical where they removed chunks of the reason people were there. How can we sing along when we don’t know the words, only the melodies

That said when the songs work (they are the ones largely left alone)the show soars. Margaritaville is a wonderful ending to Act One. Cheeseburger in Paradise is perfectly used to describe one characters need for real food. Tin Cup Chalice, a song I’ve never been a big fan of, is so good it’s now become a favorite. And then there is He Went to Paris had me and several other people around me crying. It’s one of the best moments I’ve ever had in the theater. Most of the rest were okay or serviceable - but ultimately why didn't they just do new songs since they could have done more if the songs were not used as punchlines.

I do have to say the altered One Particular Harbor which I disliked when I heard it on Sirus/XM is great in context and is perfectly used with the changes fitting how it’s used.

As a real show it's not very good. Yes I had, and you will have, a good time. Yes I sang along, even with the heavy handed Why Don’t We Get Drunk sing along (which perplexed many in the audience). And yes I did Fins at the end (restrained myself during the show). Yes I left smiling, but thinking “yea well that was a thing” rather than needing to go back. I also wondered how I would have felt had the tickets not been discounted.

And no I can’t shake the feeling that its nothing but a money grab for the Buffett machine from top to bottom since all of the alcohol being sold and all the souvenirs are from Buffett's companies. It’s a kind of empty parrothead Disney.

Yes I had a good time- and had there not been four or five moments where they got it dead nuts right I would have left it there but god damn it the show squanders what could have and should have been one of the best jukebox musicals to make something that is just okay and will probably last as long as a long vacation.
Posted by Steve Kopian at March 15, 2018

Email ThisBlogThis!Share to TwitterShare to FacebookShare to Pinterest
Labels: not a movie, theater