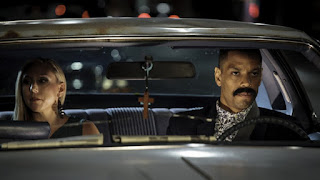 A man in debt to a bad man is hired to drive an escort to her clients for an evening and deduce if she is skimming money from their boss. In the middle of the evening  she gets a call that her mother has died and that if she doesn't have the  $50,000 for the rent owed by her mother on her house by the next morning it will be taken away and her relatives will put her daughter into a foster home.

To be honest this is a film with a great deal going against it, beginning with a contrived plot. Not only does it have a non-family friendly title which will prevent some bookings, the film barely runs over an hour with an official running time of 70 minutes. If there was a film doomed never to be seen this is it...

...which is a shame since if you can get past the fact that the plot makes zero sense, even the most contrived soap opera would never make up the incredibly stupid reasoning to set the action in motion this is a pretty good little drama on it's own terms. Seriously the whole time frame thing makes no sense and then marry it to the "we think the person is junkie stealing money" nonsense is just too much to take.  However if you  skip the set up and then just go with it the film turn out to be something nicely off beat.

Sure there are other bumps along the way but film has some really nice moments such as Megan talking to an old man while on a date and the exchanges between the main characters that reveal character more more than just move the plot work very well. Its good enough that I could recommend this film to people with a taste for small inde films who don't mind the bumps.
Posted by Steve Kopian at March 18, 2018