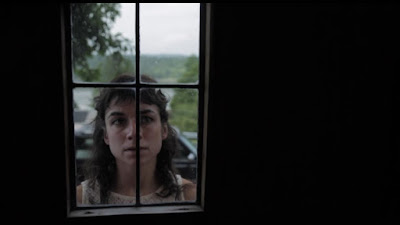 SCREAMERS is not only the title of this film but also the description of the audience watching of the film as they implore it to do something other than be a "conceptual horror film" based on Kubrick's THE SHINING. (descriptions are those on the film's IMDB page and Queens World FF page)

Slow painful and mannered in ways no Kubrick's films never were SCREAMERS is horror film made by some one who doesn't understand what a horror film is and only seems to understand obtuse performance pieces. I say this since each shot, each line of dialog is purple with meaning. Everything oozes meaning for no serious reason.What those meanings are are not on the screen, but are held by the filmmakers who refuse to reveal them to the audience.

I grew weary of the intellectually intentionally contrived nature of it all and rapidly slid off to sleep... It took me several restarts to get through the film but it wasn't worth it.

Its not so much that anyone thought making a film like this would be a good idea, rather it's more a question of who did they think we would actually want to watch it?

I can't recommend this film.

The one clunker at this year's Queens World Film Festival
Posted by Steve Kopian at March 17, 2018

Email ThisBlogThis!Share to TwitterShare to FacebookShare to Pinterest
Labels: not worth the effort, Queens World Film Festival 2018