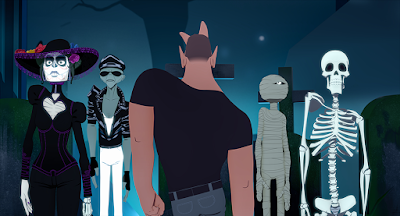 ZOMBILLENIUM is a blast. A wonderful monster tinged story about family and workers’ rights.

Set in an amusement park set up on the site of a mine that broke into hell, it is a place where monsters and the undead can find a place to work and be safe. After an overzealous safety inspector is killed on the site and returns as a monster, Satan tells the manager of the park he’s going to close it down because it isn’t making a profit. This sets in motion a battle between the vampires and everyone else to make enough money to keep it open. Meanwhile the now demonic inspector wonders how he can repair being a terrible dad and dying to his daughter.

Driven by a great rock score and some great characters ZOMBILLENIUM is a great deal of fun. I laughed and smiled and sat on the edge of my seat wondering what was going to happen. This was a film that I simply lost myself in and just went with. Yea I know it has things like workers’ rights and parental responsibilities on its mind, but I didn’t care because I was just carried along by the events transpiring on the screen.

Seeing it the New York International Children’s Film Festival I was unsure what the audience was thinking. The small audience seemed to be paying attention, but I couldn’t get a read, but then things started happening in the third act and the audience reacted with cheers and applause. The kids sitting in front of me who have read the source comics were absolutely delighted.

Joe Bendel who was sitting next to me said that if they dub it into English correctly the studio doing so is going to make a mint. I tend to agree since the mix of chills and intelligence puts this light years ahead of other animated films for older kids or adults. It’s the sort of film that were it live action would be the start of a long running franchise.

I should note that the screening I attended was in 3D. Does it need to be in 3D? No not really. That said it does add a wonderful sense of depth to the proceedings that was really cool.

Highly recommended for horror fans and anyone who wants to see just a really good movie.

ZOMBILLENIUM has one more screening this weekend at NYICFF (in 2D) so if you’re in NYC go buy tickets and go
Posted by Steve Kopian at March 13, 2018