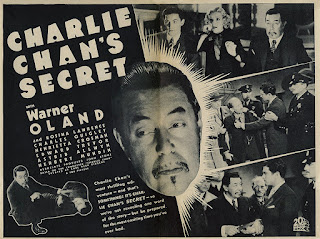 More serious Charlie Chan story has the detective going it alone as he tries to solve the mystery of a missing heir. The mystery becomes a question of murder in short order and the detective tries to find the killer before he is the next victim.

Atypical Chan is undeservedly forgotten, even by me. I remember the film not because of what it is, a cracking good mystery, rather because of what its not, a film with little humor and no of his kids to help him. Its a wonderful change of pace that marked a break from the formula that would dominate most of the films in the series. The film also has one of the best mysteries, as in the plot of what is really going on, in the entire 40 plus film series.. Closer in a way to the darkness of some of the later films, this is one of the Chans thats really is perfect for a dark and rainy night. Recommended
Posted by Steve Kopian at March 04, 2018