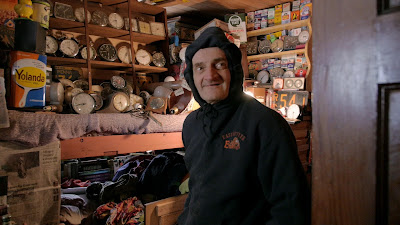 MOLE MAN Directed by Guy Fiorita,
Mole Man is the story of Outside Architect Ron Heist. Ron is a 66-year-old autistic man who built a 50-room structure solely of scrap materials, on the land behind his parent’s home in Western Pennsylvania. His home was built without the use of nails or mortar. Ron’s home keeps on expanding, as he collects, classiﬁes and displays objects from a deserted cluster of homes in the woods. When we meet him, Ron is living with his aging parents. In an effort to keep him in his home, Ron’s friends team up in search of a mystical mansion that Ron insists lays abandoned in the forest. Mole Man examines the interplay between autism and creativity. Ron, with idiosyncrasies and an eagerness to talk about them, is an ardent archivist of work that loved ones and caregivers consider odd but not necessarily important. This is the story of an extraordinary life, a family, and the beauty of thinking differently

Sponsored by the Greater Port Jefferson/ Northern Brookhaven Arts Council, the Port Jefferson Documentary Series brings directors, producers or stars of each ﬁlm into the theater for an up-close and personal question-and-answer session.
Our guest speaker will be the director, Guy Fiorita.

PORT JEFFERSON DOCUMENTARY SERIES (www.portjeffdocumentaryseries.com) is made possible by the New York State Council on the Arts with the support of Gov. Andrew Cuomo and the New York State Legislature and by the Suffolk County Office of Film and Cultural Affairs, Steve Bellone,County Executive
Posted by Steve Kopian at March 21, 2018