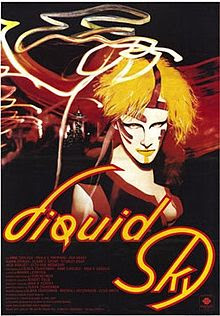 LIQUID SKY has been restored in 4K and is playing this weekend at the Boston Underground Film Festival, The punk science fiction film was a key film for many people I know since it broadened many people’s definition as to what science fiction was.

The plot of the film has a tiny alien space ship land o the roof of an apartment building in NYC. The aliens then begin to feed off the lovers of one of the women living in the building because the need the energy released at orgasm. A scientist begins to study the aliens. Strange things happen.

Weird science fiction films is in some ways less a science fiction film than an odd ball drama. The film is inde in the extreme, a fact which confused many people who discovered it on home video in the heyday of VHS tapes. What is this film that has aliens but isn’t like STAR WARS? Many people didn’t know. They didn’t know what the film was trying to do, just as they didn’t get THE MAN WHO FELL TO EARTH.

Way back in my days running a video store LIQUID SKY was a frequent renter especially on the weekend when groups of teenagers would take the film out to watch this weird little film that had warped the brains of their friends. The reaction when the film came back was always mixed, with some people loving it’s off beat aesthetic, especially for mainstream cinema of the 1980’s and others flustered by it.

My personal reaction has always been colored by the reaction of watching the film be rented for years. I love any film that shakes what anyone’s perceptions of film and story can be. As a touchstone film and the point where some people altered their thoughts on film I love LIQUID SKY. I love that the film messes with people who are unprepared for it.

On the other hand I am not a huge fan of the film itself. I never really clicked with it much. I loved the look of the film and I loved Anne Carlisle who wrote and starred in the film. But I didn’t like it. I always thought it was trying too hard and it didn’t really succeed.

As I write this I haven’t seen the film in at least 15 years. I’ve never felt the need to rewatch the film since my video store days, though I did run across it at one point and watched a portion of it and found it aged pretty good, largely I think because inde film caught up with because it was influenced by it.

Should you make an effort to see at Boston Underground or in its eventual home video release. Yes. Unequivocally yes. For better or worse LIQUID SKY is an important film for the history of science fiction. Even with my reservations about it it’s a good enough film to try. Hell I’ve talked to hundreds of people who have seen it and it always affected them in some way. Additionally the film hit home video at the right time to influence generations of filmmakers and film-goers. It was and is a film that changes minds. If you watch it and can’t see it it’s because you live in a world that was changed by its very existence. In order to understand the present and future you need to know the past. Liquid Sky is a small, but important part of cinema and science fiction history and must be seen.

LIQUID SKY plays March 21 at the Boston Underground Film Festival. It will also be getting a regular theatrical release including an engagement at the Quad Cinemas in New York Starting April 13th.