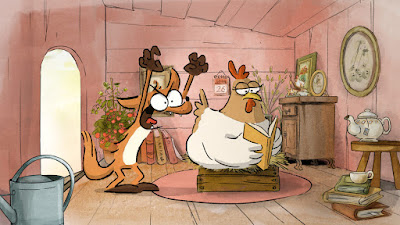 Benjamin Renner and & Patrick Imbert’s THE BIG BAD FOX AND OTHER TALES is a classic. Manic, insane, full of random references and damn funny it’s as if Chuck Jones or Tex Avery went to Europe and made a feature. It’s a film that begins with the first frame and ends with the last and is full belly laughs all the way through.

THE BIG BAD FOX... is three stories based on sketches and stories that Benjamin Renner has been creating since he was a kid. “Intended” to be three TV specials they were actually a backdoor feature conspiratorially put together by the film’s producer after Renner said he couldn’t get a story with the characters to reach to feature length. One the specials were near completion the producer asked that they be linked together so Renner came up with the idea of the animals putting on a show in three parts.

The first part, based on cartoons did for his brother when his daughter was on her way, has pig, rabbit and duck trying to deliver a baby when the stork comes up lame. The second part, based on Renner being told that chicks think the first thing they see is their mom, concerns a fox who steals some eggs only to have them hatch and the chicks think the fox is their mom. The last part is a Christmas story where rabbit and duck think they have killed Father Christmas and take steps to take his place.

I roared with laughter all the way through. So did the audience.

Filled with wonderful throw aways, Totororo, a crepe recipe, Looney Tunes, and many more. As someone from the festival said, you’ll want to watch this with a remote in hand so you can pause it to see the things that go whizzing by.

I can’t recommend this film enough. I could go into a big discussion of each story but why? The joy is in seeing the gas for yourself. Why would you want me to spoil it.

This film is a masterpiece of screen comedy- live action and animated. An absolute must see when GKids releases it.

Below is the first ten minutes of the Q&A that followed the March 11th screening. It was shot from the back of the theater so please excuse any imperfections