Ariela on KEEP THE CHANGE which opens Friday 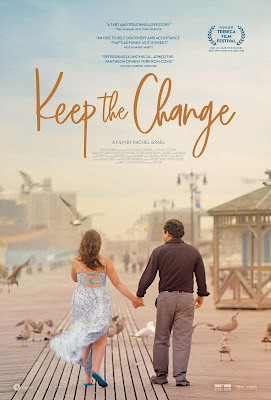 KEEP THE CHANGE played at Tribeca last year. With the film opening Friday here is a repost of Ariela's review from last year.

Keep the Change is a different movie than one I'm used to. The film centers around a group of people with autism (played by non professional actors who have autism). The films main stars are David(who actually sat two seats away from me at the screening), and Sarah.

David has to go to a autistic community group after telling an inappropriate joke to a cop about a pig. He is more functioning than some of the others, and feels he doesn't need to be there. During one of the lessons he is grouped with Sarah. The group leaders instructs them to go to the Brooklyn Bridge together (to which David makes a joke about jumping off the bridge). At first David seems annoyed and doesn't want to be bothered by Sarah, but their relationship winds up growing and blossoming.

I think because this is an area I am unfamiliar with, some of the lines that the audience laughed at, I wasn't sure if it was appropriate to laugh at or not. Some scenes such as them kissing felt awkward for me.

Keep the Change is sweet and funny and honest. Sarah especially is very open with how she expresses herself, which was impressive. She always said what was on her mind(which wasn't always a good thing!)

I don't think there are many movies that show romance in this world so it was nice to be exposed to it. To see that even though people are different and may have a disability that they still have the desire and ability to love.