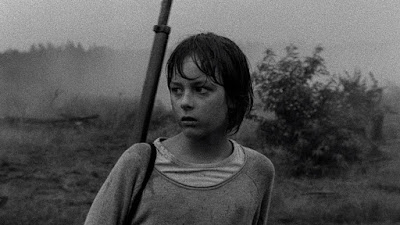 Haunting film has a young boy going off to the park before dinner and having his fantasies of playing soldier become real.

Trippy surreal and disturbing film blurs our notions of what is real and what isn’t. Forcing a rethink of the childhood games we play we now see what the real outcome would be. It’s a jarring experience that sucks us in and alters how we see reality.

Gorgeously shot in black and white the film has a timeless quality. Part of the timelessness of it is the blending of war footage with the modern war images. We are connected to our war filled past in ways that we could never be if the film was shot in color. The images stay with you and envelope you. My memory of the film is a series of stark images of the growing horror.